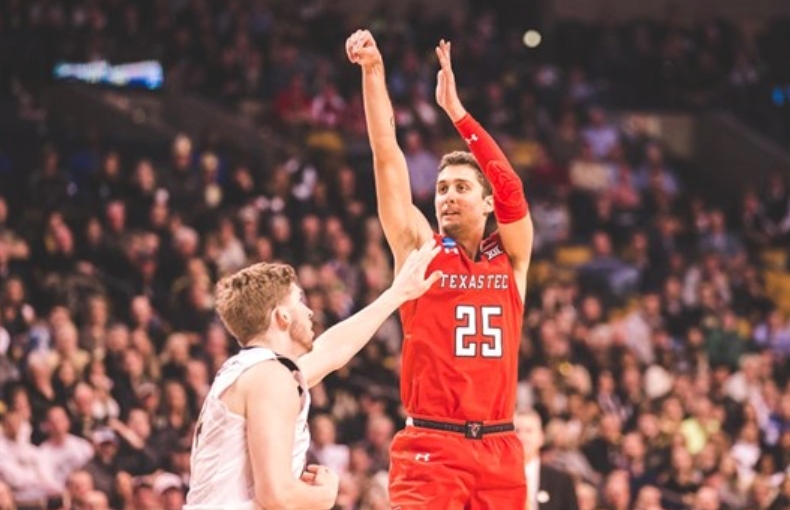 Sunday March 11th, on this date everything began. I remember that day like was yesterday, as a team we have been invited to watch the Selection Sunday show at the TopGolf, with all the Tech fans. As soon as we walked in, we saw the place full of red and black shirts screaming and cheering for us.

The show started and they announced our name after a couple of minutes, we were officially part of the 64 teams of the 2018 NCAA Tournament!

After that, everybody was praying and hoping for a good spot where to play the First and Second round. Obviously play in Dallas would have been awesome. They announced the first 4 spots in Dallas, but we weren’t in those 4. The show continued and hopefully they didn’t call our name. Finally time for the last 4 spots in Dallas: Florida and Saint Bonaventure first two, Texas Tech and Stephen F. Austin the other two! They gave us a 3rd seed, the highest ever given to our University.
I remember the fans went crazy and my teammate Andrew immediately grabbed me asking for my tickets. It was clear that Lubbock were heading to Dallas.
It was a special day, that rewarded in the right way our historic season.

We left two days before our first game.
Early flight, but what a flight! Private plane, paid from the NCAA.
An entire Aircraft only for us, I’m sorry, for our University. In fact on the back of our plane there were our cheerleaders, our music band, some fans and our entire staff, from the receptionist to the third training coach. Players and coaches had first class seats. Unfortunately the flight was only 45 minutes. Landed in Dallas, we headed to our personal bus, and our general manager handled us our customized room keys. “Davide Moretti, room 850, March Madness”.
Not bad! Especially because the hotel was a Hilton Honors.
I was used to share hotels with the other teams during this kind of events, such as European Championships, but this time was different, we probably had the biggest hotel in Dallas only for us.
Was time to get some shots up! So after lunch and couple hours of rest we were about to go practice at the American Airlines Arena, NBA arena of the Dallas Mavericks.
Pretty cool, isn’t it?
After 2 hours of open practice in front of 800 people, we went eat in a pretty fancy restaurant in downtown Dallas.

March 15th finally arrived, was a special day, not only because was gameday, but also because was my little brother 14th birthday and I couldn’t be more motivated.
Tip off was at 6.27pm, during gamedays I usually think for the previous 3/4 hours about the gameplan and how to perform the best, but that day, since I woke up, I couldn’t think anything else than our gameplan and how I should have played that game.
I was more nervous than normal, and the 18.703 people inside that huge NBA arena didn’t help me calm down at all, but right before my debut I took a big breathe in and I just ran into the court thinking to play my best.
I made my first field goal, a step back from behind the three point line, and in my mind I said: “Well.. This is not a bad start Davide!”
It probably was our most difficult game, I bet that most of my teammates were as nervous as me, but as they say: “Survive and Advance”, well we survived and we advanced.

March 16th was pretty much a preparation day. With the 12 hours rules that our coach taught us, we forgot pretty quick the game of the day before to focus on the next one.

March 17th gameday against Florida. Tough team, with really good players especially on the front court spots. It was a really good game, balanced till the last 2/3 minutes were we had a 10 points lead, but like I said they were a really tough team and they cut to a 3 points game, with 23 seconds left. They had 3 consecutive chances to tie the game and they missed all of whom.
I played a ordinary game, with no turnovers and an in and out 3 pointer, some good defensive plays, I was basically trying to make no mistakes.

I will remember forever while during a free throw, I was standing in the middle of the court, looking at that huge crowd and feeling those emotions like I have never felt before. I told myself: “Look where are you at now, just give your best”
I was scared, nervous, but I knew that myself would never have left me alone, I knew I was ready for that opportunity, all my sacrifices and practices prepared me to play in the biggest stage of that period: “The NCAA Tournament”

We were one of the SWEET 16 teams in the tournament!
We were heading to Boston in one week and Dallas treated as like superheroes, a full NBA arena with black and red jersey cheering for us, it was just unreal.

March 21st Boston bound!
Huge plane, bigger than the first one of last week. We also had more people traveling with us!!
Amazing hotel, amazing room as usual but I couldn’t think anything else of where I was going to practice and then play during the next days.
Obviously it would have been a NBA arena, but tie up my shoes at the TD Garden, on of the most historical NBA arenas, made it more special. I couldn’t wait to practice and then play there, I was literally freaking out.
We practiced there the 22nd for almost 2 hours, but I could keep practice for 2 more hours, I was way too hype.

March 23rd gameday against Purdue, a 2nd seed versus a 3rd seed, hands down it would have been a great game.
In my opinion, we literally controlled the entire game, we weren’t play our best basketball during the first half, but we ended up by 5 points. We maintained the lead throughout the end of the game, winning by 13. I probably played my best game, 7 points with 2 assists, no turnovers and good defensive plays.
But that night after our victory, it wasn’t my game or my stats made me feel so happy.
We won and that made us part of the Elite 8 teams in the country.
“The best record in the history of Texas Tech University” .. says everything by itself.
I couldn’t go to sleep that night, be part and help this team to reach the best record ever, paid back all the sacrifices and the struggles that I have been through.

March 24th I could only think about the next day and how special that day would have been, play for the Final Four on my birthday, it was just amazing.

March 25th gameday X birthday, I was about to play one of the most important game in my career so far, celebrating my birthday.
I was excited, like never before, but I was way too nervous as well.
All the country (and not only the US) was watching us. Tip off was at 1.20pm and we already knew that it would have been a sold out game. We played in front of almost 20.000 people, but this time the arena wasn’t full of red and black jersey.
We started the game as good as never before in the tournament, but they were a really good team and they ended the first half up by 13 points. They maintained a 10 points gap till the last minutes of the game, where we cut it to a 5 points game with 5 minutes to go. We gave everything we got, but Villanova deserved to win that night.
It wasn’t the best day, I wish I could celebrate my birthday in a better way, with one of the best present ever, but instead of fly to San Antonio, we flew back to Lubbock.
I still haven’t any regrets, I knew that I would have given everything I had that day, for me and for my team.

We came back right after the game, we landed at 1am and our amazing fans were there, thanking us for made them proud, it was unique.
Now everybody see us as legends, and this three weeks experience is something that I will remember for ever.